Turn it off when you leave

While this might seem like a basic idea, it really works. If you are really only in a few rooms most of the day, install the fans in those rooms (like bedroom, living room and kitchen). While the temperature of the air will stay the same, you will feel cooler from the moving air. But, the trick is that fans work most optimally at temperatures below 100 degrees F. You really also only want to use the fan when you are in the room, because they can actually heat up the room! It will also do no good to waste that energy (and money) when you aren’t getting the benefit. Ceiling fans are a great complement to air conditioning as well, so you don’t have to keep the thermostat temperature as low. 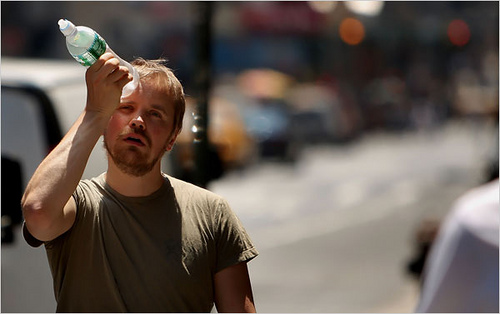 If it is hot outside but there is a breeze, get that breeze blowing through your house. Open all of the windows, but ensure that you have windows that are opened opposite each other. It might take some experimentation, but you can find the best crosswind (just ensure doors are propped open or they may blow shut).

Rather than bringing cool air in, by closing all blinds and curtains you’ll keep the hot sun out. By keeping the heat out, your house will remain cooler and hopefully you won’t have to turn on the A/C. If your blinds or curtains are sheer or translucent, this won’t work as well, as the room will get some light and heat.