It has been one scorcher of a summer in Collingwood so it is lucky we live on such a large and gorgeous lake. But, our hot and dry weather has prompted the Collingwood Fire Department to issue a fire ban, which means you can’t burn anything here or in the surrounding areas, for risk of fire.

Many communities in Ontario have fire bans in place right now, as dry conditions have led to an extreme risk of fires in forests and the homes that surround them.

When a fire ban is present in your community it means:

As well, those who smoke should be extra careful to dispose of their lit cigarettes in a way that won’t be a potential fire cause. 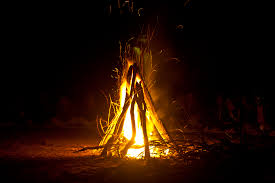 While many are aware that they can’t have fires during a fire ban, many aren’t aware that fireworks also pose a significant risk.

While this may sound like a huge bummer, risking the burning down of our beautiful trees and other topography isn’t worth a night around the campfire.

In other words, be smart and don’t have an open air burning during the fire ban.

Officials don’t know when the fire ban will be lifted, but it will have to be after some significant rainfall, which, as the forecast looks, won’t happen anytime soon.

Enjoy the hot days by taking a swim in the lake, get out on a boat or stay inside in the air conditioning!